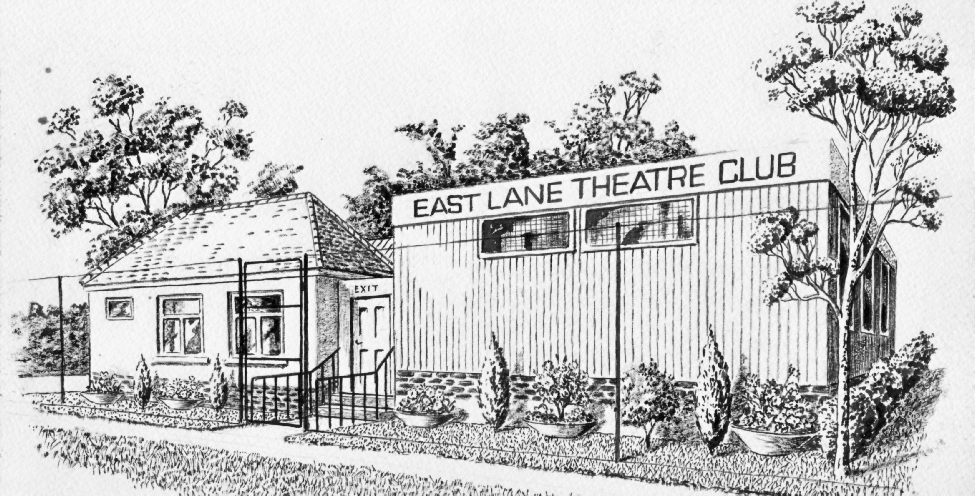 A HOME OF OUR OWN, the story of how the theatre was built

TO HAVE our own theatre was an ambition from quite early days, and it was in 1949, at the suggestion of Donald Smith, one of our founder members, that a Building Fund was established. By June 1956 it had reached the dizzy heights of £80.14.11d, which wasn’t too bad when you consider that ticket prices in those pre-decimal days were 2/6d and 3/6d!

Our history really falls into three parts. For the first twenty-five years from 1936 to 1961 the East Lane Dramatic Society, as we were then, had no regular home for its productions, and mostly shuttled between Preston Manor School and the old St John’s Church hall in Crawford Avenue.

Rehearsals took place wherever, in school classrooms, members’ living rooms and even in an upstairs room at the Century Hotel, while our small but growing stock of scenery was lodged in assorted garages on the Sudbury Court Estate, (very few members had cars in those days). A little later we were able to rent a downstairs room and corridor in the old Vale Farm House and then, a disused tennis pavilion nearby, which came into its own some years later. The next stage in our history, in both senses of the word, arrived in 1961, when the newly built Elms Hall behind St Andrew’s Church in Sudbury became available, and from then until 1989 virtually all our productions were presented there.

In the mid - 1970s the room at Vale Farm House became unavailable and the little tennis pavilion had become so full of scenery and props that new sets had to be built in the open air. Something drastic had to be done, and it was decided to purchase a second hand building and apply to the Council for planning permission to re-erect it alongside the pavilion.

Permission was duly granted, a 48ft x 24ft ex-canteen wooden building was bought, and work started on the site on Saturday 2nd June 1979.  Members, friends and parents turned out in force over the next nine days and with professional help to dig out the foundations and provide the concrete, the first footings were finished by Sunday 10th. Two months later the walls had gone up and the roof was on, and by September 1980 everything was ready for an official opening day, with the Mayor of Brent doing the honours.We now had somewhere to rehearse and store scenery, props and costumes, and all seemed well until, in 1988, we were told that Elms Hall would no longer be available. The Church authorities had marked the building for redevelopment, and its replacement, a community centre, wouldn’t have any facilities for theatrical performances.

This launched the Society on the third stage of its history. With no other suitable premises in the Wembley area it was decided, after  an Extraordinary General Meeting in May 1989, to convert our workshop into a small theatre. Fund raising, which had been quite a major part of the Society’s life for several years was redoubled, and with a production of Joe Orton’s LOOT in 1989 we said farewell to our home for twenty eight years, and also, rather sadly to our old name. It was felt that with a home of our own, it would be more appropriate to call ourselves East Lane Theatre Club.

The Gods looked kindly upon us; Brent Council granted us permission for a change of occupation and, later, a twenty year lease on the site, and also a spare building shared with the Council’s Accident Prevention Unit, which joined the other two buildings to become our annexe for dressing  rooms and storage. Work continued non-stop for the next year and a half. Fifty seven refurbished seats from a West End theatre arrived, all sponsored by members and friends, as did a lot of carpeting from the Prudential’s private theatre in Holborn, which had been demolished the previous year.

Apart from seat sponsorship and many private donations, we had grants from Brent Council, the Edward Harvist Trust and the Community Promotions Fund to help us on our way.

At first the back of the auditorium served as a temporary bar, while a makeshift lobby housed the box office (consisting of a table and a chair) which after some heavy demolition work, linked up with the old tennis pavilion. You remember the tennis pavilion?  Well it was unrecognisable without all the scenery and props.

The walls were whitewashed, the floors painted, an additional toilet was added (and the existing one dug out!), and we had a rather spartan but serviceable tea and coffee room.

Somehow all this was done by October 1990 and we were able to have a gala opening, once again presided over by the Mayor of Brent, and a total of seven performances of Alan Ayckbourn’s play ABSENT FRIENDS.

Work continued almost every weekend, the great majority of it being done by members, often to their own amazement; this included filling in the small triangular space between the three buildings, and fitting out the dressing rooms in the annexe. The transformation of the foyer and the café / bar was funded by a large grant from the Foundation for Sports and Arts. Professional help was called in for the foyer brickwork, but most of the rest was once again done by ourselves. A new carpet was woven to match the existing one, and another eighteen seats (rows G & H) were added bring the total up to seventy five.

The next major step forward, prompted by the need for more toilet facilities, not to mention the ever increasing demand for storage space, was an extension to the café. This was largely funded by a generous legacy from the estate of Sid Lee, a member for many years.

The professionals ( Tom & Gerry, we kid you not) laid the foundations and built the walls, and then we put the roof on and fitted it all out.

Moving the gentleman’s toilet to make a corridor gave us an extensive ladies wardrobe, props area two ladies’ toilets and a accessible toilet. Following that the drinks patio was re-laid and the fencing improved.

And that, very briefly, is how we got where we are today. But as every householder knows, there is always something needing to be repaired, renewed or improved and our

theatre is no exception.But what about the hundred productions? Well, that’s a story for another day,  We’ll be writing about that at the start of our 25th Anniversary season.

An artists impression of how the theatre would look (c1989)